Managing cookie setting
In order to offer you an optimal experience with the site, we use cookies. These are small text files that are saved on your computer. These include cookies for the operation and optimization of the page, as well as for services such as text or video chat, as well as for advertising based on your behavior on the Internet. For example, you can find out if you visit our website several times from the same device. We want to give you a choice of which cookies you allow:
Mandatory cookies
These cookies are necessary for navigating pages and using basic functions
necessary
Analytical cookies, marketing cookies, services of other companies (independent third-party providers)
Analytical cookies
These cookies help us better understand user behavior.
No
Yes
Marketing cookies
These cookies and similar technologies are used to display personalized and therefore relevant advertising content.
No
Yes
Privacy policy
‹ Return to search results │ Home  >  Summer tyres  >  385 / 65 22.5  >  Continental HTR 2 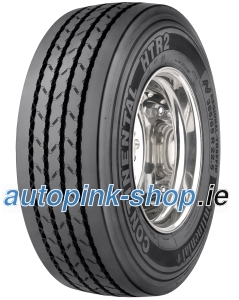 Please note: Prices apply to tires without rim. Depending on the tire dimension, the tread pattern may vary.

71dB
DEX:
For questions or concerns please contact us at autopink-shop​@delti.com

Print details
As a precursor of a new generation of truck tyres, the trailer tires from Continental HTR2 to the starting line.The all-rounder for the local and long-distance transport convinced with qualities, where it matters: His own weight optimized, the demand for good payload, which allows increased treads run much higher benefits.

Even if the economy well with the logistics industry thinks they still struggling with steadily rising costs. The tyres in the fleet cause about three percent of operating costs. They added the influence of the tyres on fuel consumption - every third tank is placed directly through the rolling resistance of tyres caused. This is where the new HTR2 trailer tires. The axes that have the greatest weight to bear during transport, first with the rollwider stands optimized Continental tyres as standard. Five percent less rolling resistance compared to the previous generation, the new tires for semitrailers to offer and excellent running characteristics on top - first come HTR2 as the all-round format 385/65 R 22.5 in the trade.

New technologies for higher performance run.
A new steel belt stiffened the construction of the HTR2 the rolling resistance is minimized and the durability of the carcass. The ribs construction keep the forces on some raw trailer and better ensure the safe seat of the tyre. The treads of HTR2 receives 20 percent more rubber and a 17 millimeter effectively increased depth. The magnified uprising area provides excellent running characteristics even when abrasion. With its kilometer benefits is the HTR2 to the top of its class - its large reserves make it possible.The tire customer benefits by reducing fleet costs.

Three different areas are tested: rolling resistance, wet grip and the rolling noise the tyre makes on the road.

The following are not affected by the EU Tyre Label: retreaded tyres, professional off-road tyres, racing tyres, tyres with additional devices to improve traction such as spiked tyres, T-type emergency tyres, special tyres for fitting to vehicles first registered before 1 October 1990, tyres with a maximum authorised speed of 80 km/h, tyres for rims with a nominal diameter of 254 mm or less or 635 mm or more.

With this regulation, the European Union is pursuing the goal of promoting economic and ecological efficiency in road traffic as well as increasing road safety on the one hand, and on the other hand, granting consumers more product transparency and at the same time serving as an active decision-making aid.

Already during the incorporation, experts criticise the fact that the EU Tyre Label unfortunately only shows a few product characteristics. Apart from rolling resistance, wet grip and rolling noise, which are the main focus of EU tyre labelling, tyres have much more important and safety-relevant product characteristics, such as aquaplaning properties, driving stability, service life, braking properties on dry and wet roads, behaviour in wintry conditions, etc.

Tyre manufacturers point out that test results from various institutions and journals remain an important information medium for the end consumer. These tests usually focus on further safety-relevant product characteristics besides the EU standard qualifications for tyre labelling, which are always important for the final customer.

*Prices include VAT and delivery within Ireland.
**More than 90% of our orders reach the customer in the specified delivery time.
Return to search results

Receive news and information on tyres, offers and competitions

Partner garages in your area.

Choose one of our partner garages in your area

Do you need new tyres quickly and at the best price? AUTOPINK finds your new tyres in less than a minute. We will deliver your choice as fast as possible. A service for you at no extra cost.